A Virgin Among the Living Dead

Jess Franco’s low-budget zombie erotica is one of his most interesting works, as technically speaking, it sits oddly somewhere in the void between his stunningly competent (Eugenie) and his loveably trashy and inept (Vampyros Lesbos, Female Vampire)
And as if this wasn’t enough of an anomaly unto itself, Virgin Among the Living Dead goes further into the inexplicable as it’s from the very era that produced Franco’s most famous works and his most famous actresses/muses, such as Soledad Miranda, Maria Rohm and Lina Romay. However, Virgin stars none of these Franco favorites, instead,

the leading lady is played by Christina von Blanc, who’s only other Franco credit (as far as I could find) was his sex flick The Virgin Report. Christina von Blanc does, however, make for a very appealing and sexual lead, playing it up with a refreshingly innocent girl-next-door flair. In fact, the actress manages to carry the entire film on her own shoulders, especially through the lackluster horror sequences that are interspersed between the far more alluring scenes of lesbian sex, vampiric fetishes and the female solo rolling-around-on-the-carpet nakedness.
The zombie and often laughable 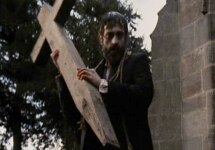 “horror” (or fetishistic) sequences actually aren’t all that terrible; often reminding me of another Spanish zombie flick called The Living Dead at Morgue (a.k.a. Let Sleeping Corpses Lie) – and I know that hardcore

zombie fans of Manchester Morgue are probably going to want to kill me for even mentioning this film in the same essay as Jess Franco – but come on, Manchester Morgue was certainly no Night of the Living Dead, despite all of its bloody (and somewhat uninspiring) coattail-riding intentions. But that being said, Virgin was no , either, if you’re going to compare strictly on a zombies and grue basis.
But Franco’s film indeed has an interesting cultish-mystery spin as our heroine goes about trying to figure out if her bizarre hallucinations are really happening of if the mansion she’s just inherited is somehow

haunted, which simply by its own plot construct also gives Franco the chance to exploit some of the visual sexual-psychedelics he’s so familiar with. The zombies act more like ghosts than traditional gut-munchers or brain-eaters, and really only appear near Virgin’s conclusion, where the far more entertaining nude Satanic sacrifice is also about to unfurl.
The charming Virgin Among the Living Dead eluded my Franco library for a while because I couldn’t find it around town for less than $35.79 for the single DVD release! Last year, Image Entertainment released the four-disc Jess Franco Collection box set, which includes the Virgin DVD, and I unexpectedly found it at the Future Shop for a mere thirty-four bucks brand new. Well recommended!
-V.

*Note: This retrospective pertains to the R1 preferred “Director's Cut" version, which does not included the "added" zombie sequences in the middle of the film.
Posted by V at 4:43 PM No comments: