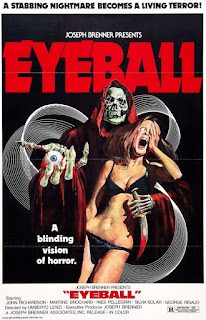 Holy Christ, this has been a sad year for genre cinema fans, as another quiet icon of genre cinema passed away earlier this week. Italian director Uumberto Lenzi may not have been a household name, but many fans knew the name of this hugely prolific commercial Italian genre director – more specifically, Umberto Lenzi actually specialized and made his entire career out of Italian sub-genres, from Poliziotteschi the Italian cannibal “gut-munchers”, the latter with which Lenzi has actually been credited with inventing upon the release of his cannibal classic Man from Deep River. Indeed, he explored this sub-genre further with his equally important Eaten Alive (my personal favorite of his cannibal films), and his most popular, Cannibal Ferox.

In 2002, several years before the advent of the smart phone and any traffic law preventing the use of cell phones while driving, my friend Josh (now from GBW Podcast) and I got into an argument while driving down a freeway as to whether or not Umberto Lenzi had directed the zombie-virus movie Nightmare City. I insisted that he had, Josh maintained an argument to the contrary. Neither of us letting go of our arguments, he finally phone one of those friends who knows everything about everything to do with genre cinema, one hand on the steering wheel and the other holding his flip-phone up to his ear. “Yo, who directed Nightmare City...? No... No...! No!!” he exclaimed before slapping the phone shut. “What?” I asked. “You were right,” he said. “That's why you're pissed off?” I asked him. “No, I'm mad because Lenzi's so much better than that!”

Okay, so that was the second thing I'd disagreed with during that drive. Incidentally, we were coming back from a DVD warehouse where we'd loaded up on genre DVDs, as was our passion. But Nightmare City was an Italian genre movie I was actually extremely fond of. Despite Umberto Lenzi's hugely significant contributions to the Poliziotteschi and cannibal-horror sub-genres of Italian cinema, my favourite films of Leni's career actually fell within the giallo and the popular 80s zombie genres. Along with the exciting and original Nightmare City, I was also a huge fan of his brilliant gialli Seven Blood-Stained Orchids and Spasmo, and the revenge-giallo/thriller Hitcher in the Dark (which was actually an American production starring a pre-Melrose Place Josie Bissett). Lenzi's importance as a groundbreaking genre filmmaker did not stop with merely having invented an entirely new horror sub-genre for Italian cinema, his work had also been copied by his more famous colleagues (Brian DePalma and David Fincher using key sequences from Seven Blood-Stained Orchids), and in the 70s his movies had even been re-worked by American filmmakers for the North American releases (it has been rumored and at one point confirmed by Lenzi himself, although he truly hadn't wanted to believe it, that George Romero had shot added footage for Lanzi's Spasmo for the American theatrical/drive-in releases).

Finally, though, as contemporary maverick filmmakers Quentin Tarantino and Robert Rodriguez sought to create new works based on or influenced by pioneers of popular Italian genre cinema, Umberto Lenzi got some mainstream North American recognition via Robert Rodriguez' Nightmare City-inspired segment for the pair's genre throwback film Grindhouse. Rodriguez and Tarantino both celebrated Lenzi's film as the key idea behind Planet Terror. Since then (2007), a portion of Lenzi's insanely massive genre output had been restored and re-released in the Blu-ray catalogues of British distribution companies Arrow and Shameless and the Italian/American distributor Raro, following in the DVD footsteps of the old Anchor Bay and Shriek Show releases of the early '00s.

Lenzi was one of the quieter, and most under-appreciated talents of genre cinema; but quiet or not, he was no less a giant in the arena of genre cinema, and the body of work he has left behind will no doubt be appreciated for years to come. RIP, Umberto Lenzi. 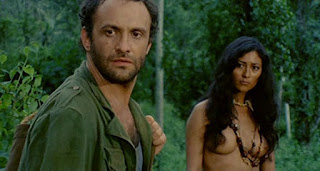 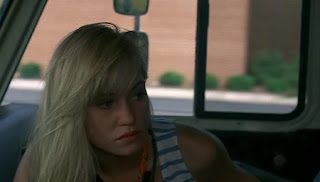 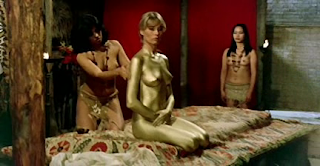 Last month we lost another cinematic icon when character actor Harry Dean Stanton passed away at the age of 91. Of course Stanton was one of America's greatest character actors, but to a genre film fan like myself, he was also a key figure in the genre-film world, appearing in the films of Alex Cox and Ridley Scott, while also maintaining brief collaborations with John Carpenter and David Lynch, who put Stanton's talents to amazing use in memorable and near-iconic roles of starkly satirized Americans. Often, Stanton could bring any given film epic waves of emotion and intelligence by his subtle and equally expressive manner from underneath an all-American baseball cap. Wim Wenders exemplified Stanton's talents in his film Paris, Texas, which incidentally had been written by L.M. Kit Carson, who had also scripted The Texas Chainsaw Massacre Part 2 for Tobe Hooper and which starred another Vietnam-era American acting icon, Dennis Hopper. Hopper and Stanton were somewhat cut from the same American, (or Americana) cloth, with the likes of Jack Nicholson, Peter Fonda, and Warren Oates, the last of which Stanton had appeared alongside in Monte Hellman's Cockfighter. Like Hellman's own films, Harry Dean Stanton was as American as the Road Movie itself, born of and bred by American cinema. Stanton himself could effortlessly inject a deeper Americana into any of the genre films he played in, often simply just by showing up. And often this imbued culture of Stanton's Americana came from a comfortably paradoxical angle; such as the baseball-hat wearing spaceship mechanic in Ridley Scott's Alien, a film that itself was conversely on the fringe of the science fiction genre back in the late seventies as it was on the fringe of American culture itself. The charm of Scott's vision of Alien that has never been (and could never be) replicated is the down-home American feel of the working-class characters aboard the ship, characters that are clearly a product of the ideals of the working-class US citizens of the seventies, farm enough removed from the Vietnam War to achieve a little skeptical hope, and not yet embroiled in the Regan administration of the eighties. Much of this working-class idealism is what Harry Dean Stanton seemed to embody in his work as an actor, and as America progressed towards narcissism, riches, and fame-mongering, so Harry Dean Stanton began to appear, through his characters, as slightly more sardonic, a little more weary, a little more cautious about his previously-embodied Americana. Strangely, these characteristics culminated very well for Stanton in his cameo for Korean director Kim Jee-woon in his first American film, the Schwarzenegger-comeback action-comedy The Last Stand, where Stanton plays a farmer taking his last stand against an evil Peter Stormare who wants to bulldoze his land in order to facilitate a ridiculously over-the-top (yet hugely entertaining) jailbreak for his billionaire boss. Of course, Stanton has portrayed this typified character elsewhere in more critically-celebrated films, like his last movie Lucky (released to film festivals just this year), but being a genre fan, movies like those of Kim Jee-wong, John Carpenter, Alex Cox, and David Lynch is where my cinematic compass happens to be magnetically attracted. My own memories of Stanton's performances are encapsulated in John Carpenter's Escape from New York and Christine, David Lynch's Wild at Heart, Ridley Scott's Alien, Alex Cox's Repo Man, Wayne Wang's Slamdance, and, perhaps a little oddly, John Binder's 1985 American sci-fi comedy UFOria, which I saw on Superchannel that year as a 10-year-old-kid, and from one of Stanton's lines “Well, everybody's gotta believe in something... And right now, I believe I'll have another beer,” was honestly the first time I'd ever heard that joke and I practically busted a gut when I heard that.

As a actor, Harry Dean Stanton, without exception, brought a greater depth in general to the films and stories that surrounded him (or his characters), even if he (or his characters) were not the exact center of those stories. He could always fit into any film he was hired to contribute to with stunning ease; his presence would undoubtedly make a viewer think “of course Harry Dean Stanton was PERFECT for that role!” – but that in itself was all Harry Dean Stanton; that was the true embodiment of his talents, it was his talent to be able to embody any part of any type of story, and to seat himself into his roles perfectly, so that ultimately all of his roles were the perfect roles for him. In the end, Harry Dean Stanton was the last of the truly genuine performers. 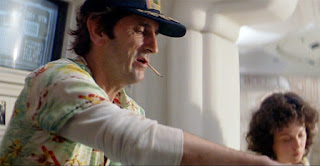 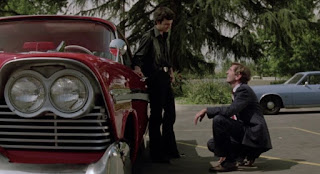 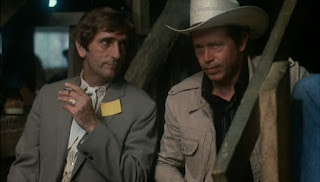 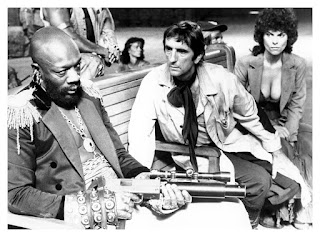 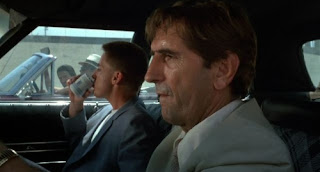 Just a quick blog to shoutout not just the incredibly-designed novel of the fairly new genre-writer Grady Hendrix and his publisher Quirk Books - not only are these books simply INSANE in both their cover and very clever interior designs, but Hendrix's writing is fast, fun, and totally satisfying. Actually, "Paperbacks from Hell" is an honestly brilliantly-presented celebration of the horror novels of the 80s and 90s. All HIGHLY recommended!! 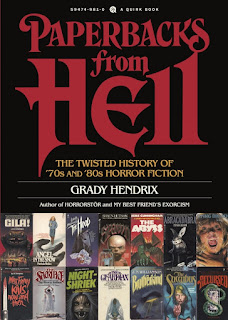 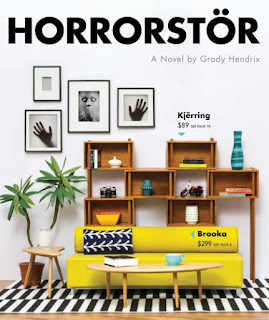 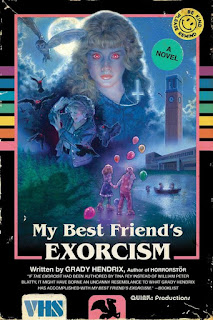