Continuing with the “Immoral Tales” miniseries of blarticles, this week I decided to take a look at the first (and only thus far) HiDef release of any of the Immoral Tales directors' films. While I'm happy that Larraz' erotic and violent vampire film has made it to Blu-ray (in what's actually a beautiful grainy transfer from Blue Underground) I can't say I'm not just a little disappointed that we're still waiting on something Jess Franco to be released in this new-ish format. Keeping tabs on what's coming out in the near future, it doesn't seem that Franco's films are even on the horizon, yet I remain optimistic that his films are still somewhere on the radar of the smaller distribution companies. Even Lloyd Kaufman is putting his films out on the HiDef format as of this year, so I do hold out hope that Blue Underground will get a couple of its Franco titles to Blu-ray sometime, before the format changes yet again and we have to watch them in seizure-inducing 3-D.

Not to take away from the celebration of Larraz' minor masterpiece, mind you. His film Vampyres would appear on the surface to be another low-budget exploitation piece of its era (circa 1974, I believe), and there is abundant nudity and some good, bloody shock scenes (in this uncensored release, anyway), but watching this film now for the third time in my life, I really had a chance to appreciate it for the gem it really is. Not only is Vampyres one of the epitomized example of erotic horror, not only is it oozing with gothic tone, not only is it surprisingly well-edited, tantalizingly structured, sumptuously shot, not only... well, I hope you get the idea because I've run out of things to describe the reason it's picked up a cult following since Anchor Bay first released it onto DVD years ago. A well-deserved cult following, I should say, too. Director Larraz had no illusions as to what his film was about: a pair of bisexual female vampires, sexual and violent. On the surface, again, it seems

like the mere description of an number of exploitation films. And that's where Vampyres throws its cult audience for a loop. Other than a couple of awkward shots where the lead actresses seem a little hesitant to fully entangle each other's tongues together, for the most part, the eroticism is genuinely... well, erotic. The violence and editing are nicely shocking and jarring when the film calls for it, while at times the film and the camera movements seem to wallow in the gothic aesthetic (and sometimes just the sheer creepiness of it all), in many instances evoking the gothic feel of the classic vampire films that have preceded it. As much as Vampyres could have fallen into camp, it's the verisimilitude of all the performers that help keep the film set firmly in the erotic horror sub-genre, creatively ensuring that the film retains its intended tone throughout. That's not to say, of course, that Vampyres is without humour. There is plenty of dark humour permeating the proceedings, though not through the scripted dialog, per se, but rather by the way the film's plot is constructed. (More on that in a minute). Put another way, it's all done without grabbing for explicit guffaws, and in my opinion a lot of the darkly humorous tone (when it appears) is kind of unsettling (sort of in the way American Werewolf in London was able to distort its humour within its horror) – which then keeps it from going camp. The big difference between Vampyres and American Werewolf (other than the obvious) is that the dark humour in Vampyres comes more from the situations and the intercutting of parallel scenes than from intentionally scripted jokes (as in American Werewolf) that are verbally intended for the actors. No, in Vampyres, not one actor actually cracks a honest to goodness joke, yet there are scenes that are played out with such sublimely sure-handed ridiculousness that you're almost mercilessly forced to enjoy what's happening. As in the scene when a wine connoisseur playboy is invited to the mansion by one of the vampiresses, and he hears their captor screaming in the night, she turns and tells him, “Oh, that's just Fran's boyfriend. He gets like that when he's drunk.” Yeah, I hate getting like a screaming bloody captive when I've had a few too many beers, too.

But I have to say, getting back to the Blu-ray format that Blue Underground had released, one of the most enjoyable things is actually the main menu, where a veiled loop of the Vampyres' shenanigans is set to the pounding title soundtrack. So cool, I could've kept the menu playing for half an hour and been severely entertained.

But don't do that. Watch the movie. It's good. Really. 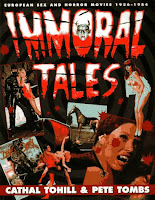 The story opens up on a beach where along the tide, a young girl is mesmerized by a black iron rose that has washed up on the edge of the rocky shore. Rollin shoots a lot on the beach, and the beginning of this film looks like it could’ve picked up mere moments after the finale of The Nude Vampire. As we follow this young woman, we begin to get into a surprisingly mundane (for a Rollin film, anyway) aspect of her life, in a school classroom, where she is being wooed by a not particularly handsome fella. I suppose he has his own charms, and hey, he is European and it's the seventies. He finally talks her into going on a bike ride with him, and they wind up at a gorgeous country cemetery, one of the kind you’d really only be able to fully appreciate in Europe, and Rollin does a mesmerizing job of bringing the beauty of the cemetery to the screen. As you might have been able to tell from the description thus far, this film is very deliberately paced, Rollin is far more concerned with cinematic aesthetics than with creating any kind of intricate plotting. The plot itself, from this point, is simple – boy wants to fuck around, talks the girl into it, they get stuck/lost in the cemetery after dark, they get in a fight, and ultimately she goes mad – yet the plot possesses the power to hypnotize, and the deliberation of the plot (or really, it's the deliberation of the characters' actions – as in walking around aimlessly, hopping over gravestones, etc. – while the plot is pretty much put on hold altogether) is nearly completely overshadowed by the simple fluidity of the film itself. None of the physical meanderings ever seem like they're in place to stretch time, rather the meandering of the characters through the film's timeline seems to be exactly what the film is about. It is a gorgeous sight to behold, in a slightly bizarre sort of way.

The visuals, especially towards the last third of the short 75-minute movie, evoked for me thoughts of the French new wave films from the mid-to-late sixties, the beautiful handheld camerawork and the juxtaposing cutting, and the whole sure-handed execution of the entire thing really started to give The Iron Rose the feeling of a sort of new wave horror film.

The more I sit with this simple film, the more I think it might be creeping up there with my tip-top Euroshock favorites.
-V 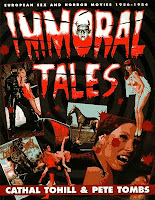