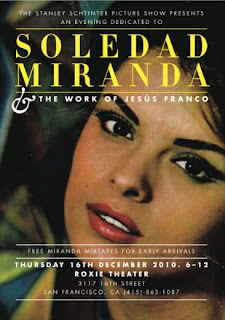 Posted by Creepy Six Films at 11:28 AM No comments: 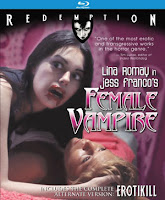 Just as corporate scientist are working hard to bring us SUPER-HD, Jess Franco gets some long-awaited notice on blu-ray... although the people at Twitch don't seen very impressed... "Redemption Films deal with Kino has produced a great number of gems ripe for rediscovery, films that would never have made it to HD without the clout of a venerable company like Kino behind them. The question now becomes, is it really worth it?" I'd say of course it's worth it, for the simple fact that this prolific director already has a cult following. Is Twitch saying that becuase Franco's work is way outside of the mainstream that his fans don't deserve - or that, it really doesn't matter if they do - to see his work in the best presentation possible (that is to say, as close to a cinema experience as we're likely to get with Franco save for seeing a retrospective at a Parisian cinematheque every 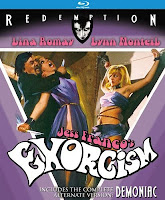 half-decade or so)? I'm just stoking the proverbial fire because, no, that's not what Twitch was saying, obviously, but I'd dare point out this lack of thought put forth in the brief blurb preceding the actual review of the Female Vampire blu-ray -- due out in just a few days. You can read about it here. And actually, it's a really good review, and I have to say I do agree with pretty much everything else post-blurb. Also, European retailer/distributor 1Kult has some hi-res Franco goodies this month, too... One thing Twitch did mention within the blurb in question that is obviously close to being right... the apocalypse does seem to be upon us now. 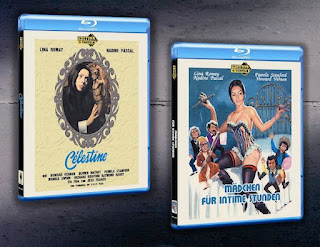