Dug up from the archives...

Holy crap, I found this article buried deep in the recesses of my hard drive as I was updating the Creepy Six Films site. This is an ancient article I'd written (and had posted on that site) to try to get people into the sexy femme fatales of the sixties & seventies European horror/thrillers I was (and still am) into. Re-reading the article, it made me cringe. I sounded as if I knew about things of this nature better than anyone else. Jeez, what a pretentious knob. I even wrote it under a pseudonym! What the hell was I thinking? Anyway, thought it might be fun to re-post it, warts and all (it hasn't been touched or re-written), and if anything, at least the crappy low-res stills I'd tracked down across the internet (back when it was properly spelled Internet) might provide some mild entertainment. Yes, feel free to skip over the entire article to get to them, too.


Eurochicks
Article by Ricky Laazar
Some of Europe’s thrillers and exploitation-genre pictures have managed to survive obscurity after several decades thanks mostly to the DVD revolution, and the independent studios that take the time to restore and re-release these films to fans and seekers of decidedly non-mainstream cinema. Most of these films come with a cult following attached, and a lot of the reasons for that are the uniquely beautiful actresses that have graced the celluloid of these foreign features. This article is dedicated to them.
Soledad Miranda (aka Susan Korda, Susann Korda) is best-known for her collaborations with Spanish director Jess Franco. After casting Soledad as “Lucy” along side Christopher Lee and Klause Kinski in Count Dracula, Franco obsessively cast her in a string of feature films to follow, including Nightmares come at Night, Euginie de Sade, The Devil Came from Akasava and the infamous Vampyros Lesbos and She Killed in Ecstasy. Soledad also appeared in several other features, including the American-produced 100 Rifles with Burt Reynolds & Raquel Welch, where she performed a topless cameo. Her features and on-screen presence are nothing short of utterly captivating, making Franco’s often dire films compulsively watchable. Sadly, just as Soledad was about to sign a five-picture studio contract with a German company, she lost her life in a car accident – the day she was to sign the contracts - cutting her career and her life short at the age of 27.
Barbara Bouchet is probably my favorite, a stunning (and I’ll only use this word once more in the course of this article) strawberry-blonde who actually has quite an extensive Italian filmography. North American viewers will be most familiar with the films Amuck! – a sex/revenge picture that made it into U.S. theatres in the 70’s, Don’t Torture a Duckling – Italian cult director Lucio Fulci’s infamous thriller where she has a lead role (and she’s featured in a very sexy early scene), and finally in Martin Scorsese’s Gangs of New York, where she has a small role. Most of Barbara’s films were produced in Italy in the 70’s, but she also appeared in the American publication of Playboy magazine in a nude pictorial in the 70’s.
Okay, this is where I use that word for the second time – the absolutely stunning brunette Edwige French, an Italian actress that has had showy rolls in Italian thrillers of the 60’s & 70’s such as The Case of the Bloody Iris and the famous director Mario Bava’s 5 Dolls for an August Moon. When Edwige French is on the screen, she rules the scene with her beauty, energy and playful approach to her acting (referring to the 5 Dolls film). Of all the actresses, Edwige is probably the least known, appearing in several lesser-known Italian thrillers including Sergio Martino’s Your Vice is a Closed Room and Only I Have a Key.
British actress Suzy Kendall is also no stranger to Italian films, taking the lead rolls in several pictures including Circus of Fear, Tales that Witness Madness, Dario Argento’s Bird with the Crystal Plumage, Umberto Lenzi’s Spasmo and Sergio Martino’s Torso. She’s appeared in several films in America and Britain, and she is an excellent leading lady. The characters she plays are often intelligent and quick-witted. She’s definitely pretty, and one unusual thing (for genre actresses) is that I’ve yet to see her in a film where she performs nude or partially nude. (As a note, I have not seen all of her films).
Susan George, the quintessential blonde cutie of the 70’s. Fans of 70’s drive-in cinema would know her best. This is one actress where if she’s in a film, I’ll watch it (and as a rule, I’m not one to watch a film simply because of the star), though I’ve found that generally, her films (both British & American) are quite good. Not afraid to show her assets, she still emanates an appealing innocent sexuality on screen even when playing a roll without sex or nudity. Susan’s usually cast in lead or main co-starring roles with films like Venom, Die Screaming Marianne, Fright, Dirty Mary Crazy Larry (my personal favorite) and Sam Peckinpah’s controversial 70’s shocker Straw Dogs. She is a fabulous actress with a presence that can be both commanding and care-free.
Marisa Mell – Groovy, baby! Her most well-known movies are probably the Umberto Lenzi thriller Seven Blood-Stained Orchids (1972) in which she had a co-starring roll as twin sisters, and the 1967 pop-comic adventure Danger: Diabolik directed by Mario Bava, in which she was chosen for the lead female roll over Catherine Denuve for her decidedly more “comic book” look. She’s a fun actress who gained her highest cult notoriety with the Diabolik role, though she’d appeared in a slew of Italian sexploitation films in the 70’s and had continued working steadily as an actress and model throughout the eighties and nineties, until her sudden and untimely death in 1992 (due to throat cancer). She still has many fans worldwide.

Asia Argento, daughter of internationally-acclaimed Italian director Dario Argento and one of the most high-profile European actresses of the new millennium. Getting her start in her father’s films when she was just a teenager (The Church, Trauma), she broke out of strictly-Italian cinema in her twenties when she began taking rolls in artsy/independent productions like B Monkey and New Rose Hotel before hitting it big in XXX with Vin Diesel (2003). She continued to work with her father through the 90’s, taking the leads in his films Phantom of the Opera and The Stendhal Syndrome. Interested in following in her father’s footsteps, Asia began to write, produce and direct her own short & feature-length films independently. And despite her move behind the camera, she still finds time to act in her own films as well – including the self-exploitive Scarlet Diva.
Rosalba Neri is another Italian cult starlet from the films Lady Frankenstein, Amuck! (with actress Barbara Bouchet), Slaughter Hotel and the Roger Corman-produced Arena (with Pam Grier) – all produced in the early seventies. She has over 98 film titles in her acting resume up until 1985 when she quit acting - though ironically, her bigger claim to fame is her daughter, actress Francesca Neri, who began acting in 1987 and has appeared in Hannibal and the Arnie-actioneer Collateral Damage.
And to close off this little tribute, we have the voluptuous horror actress Ingrid Pitt, who has starred in a slew of 70’s gothic horror films produced (at the time) by British horror studio HAMMER. The red-haired actress’s horror filmography includes many cult classics like The Vampire Lovers, Countess Dracula, The Wicker Man and The House that Dripped Blood. She’s also a writer, authoring books about Hammer horror films and cinema vampires. A talented actress and intelligent woman, Ingrid has worked with several highly-regarded British film directors, and she is always a pleasure to watch - naked or clothed.
(from May 2004) 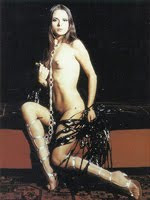 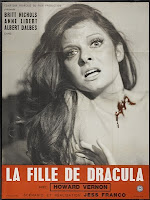 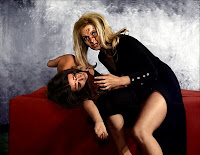