It's a shame, it seems like the internet news on Lina's death has been leaking slowly, I only heard about this today from a Mondo Macabro twitter post from the 24th - yet other sources are saying her actual date of death was nine days earlier than even that. She lost a battle with cancer, Jess Franco's life partner and muse. In his films, she was a force to be reckoned with whether playing a hard-ass femme fatale (or vampiric succubus, for that matter) or a mousy half-insane victim in his more atypical giallo-inspired sexploitation flicks. She worked with him far past her erotic due date, yet she was always a welcome presence in his films. And more than just that - she'd become an expected presence, part of Jes

s Franco and his films. This is a sad reminder that as we get older we are bound to lose some of these inspirational performers and artists from this mortal coil, as we'll also go one day, but we will at least have her work, and her partner's work, to enjoy and be inspired by, influenced by, get drunk to, until our time comes as well. It just won't be the same knowing you're not around any longer, Lina. RIP. 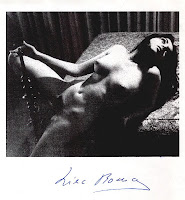 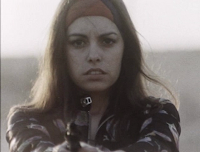 I have not been, I'm sorry to say, in much of a Jess Franco state of mind lately. I've moved back from the UK and I was certainly glad to have access back top my stacks of retro Shriek Show and Blue Underground DVDs. Loads of Franco in there, that's for sure. Unfortunately, my limited leisure time on the DVD spinner has been filled more with the likes of John Carpenter, Brain DePalma and Umberto Lenzi (although the mannequins in Spasmo always reminded me of Franco's sixties masterpiece Succubus)
Apparently, the folks in charge of cult blu-ray distribution haven't had much of a mind on Franco, either, instead focusing on releasing the early stages of Jean Rollin's catalogue in glorious hi-def. It was sure nice to see these bad boys up in my Amazon recommendations... 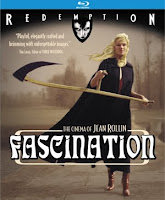 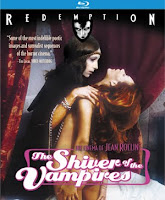 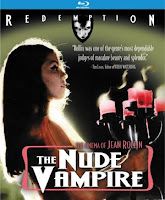 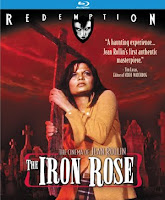 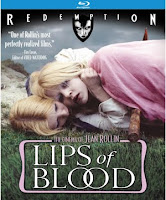 If these discs do well in the face of the inevitable complete disappearance of the tangible media, more Rollin titles have been promised on blu-ray. Personally, as a collector, I'm both a little saddened and excited to think that this might be our last chance to own actual print copies of these, and many of our other favorite films.
-V.
Posted by V at 2:04 PM 2 comments: