Private Collections; a 1970s anthology film of eroticism and the fantastique, directed by three of the most prolific and professional erotic cinema auteurs of that (and this) time.
I had such a great time with my Xmas Xploitation Triple-Feature that I went ahead and tried to replicate it this holiday season. Of course, as anyone knows, when you try to replicate something that had been absolutely amazing to you... well, you just can't. That's okay. It fully cements the amazing experience in your memory; and whilst you commence the futile journey of existential replication, you will inevitably wind up with new, different, and yet just as valuable experiences. So while I did not have the life-changing experience of viewing a trio of amazing world exploitation films in a single night, this reaching journey did take me to one film – a DVD – that had been obtained and had been sitting idly in my personal collection for a few months now; a hard-to-find (at a reasonable price) DVD copy of

Finally, the film fell slightly flat (but not altogether!) because while I held the highest expectation for the third and final director, Walerian Borowczyk, whose previous films The Beast and Behind Convent Walls I hold in the highest regard when it comes to erotic retro-exploitation-arthouse cinema, delivered a rather subdued, and yet engaging tale of a single mother who tries to hide her son while she hopes to deceive her one-night-stand into developing a relationship beyond what it is, or ever could be. Wrong time, wrong man. There is beauty to be beheld in Walerian Borowczyk's final segment of Private Collections, but it's too minor, overall, to achieve a lasting resonance to the anthology as a whole.

However, also as a whole, the anthology is artistically and erotically (and a times even humorously) successful. Commercially? I have no idea. I'm watching it for my first time in 2015, a film that was released in 1979. But the very fact that I am even able to watch this film over 35 years after its initial European theatrical release has to speak something about it. 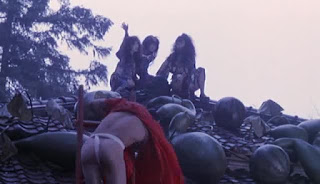 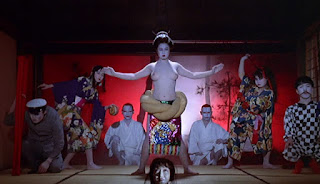 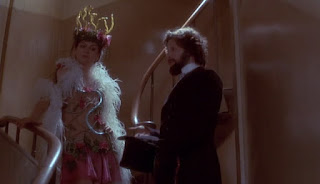 I was fortunate enough to have received three older exploitation films via the post this week – lucky, because not only were these three separate packages from thee separate Amazon.ca sellers not even supposed to have arrived until the new year, but also lucky as it was three days 'til Christmas and the two post offices near my apartment are packed to the tits with Christmas packages and boxes. It's not an overly fun time at the post office this time of the year, the skeleton staffs are overworked and stressed out and trying to cope with the influx of mailed presents and packages as best they can; at times it looks like they're trying to bail out a sinking ship with a tea spoon. But they always end up managing. This year, I don't have much to manage over the holidays, Xmas 2015 is shaping up to be a relatively low-stress holiday; which provides a fantastic framework for catching up on some old cult oddities that I have been missing out on for years. Two of the releases I purchased had been released on DVD by Severin Films and Synapse Films (respectively) nearly a decade ago – give or take a couple of years – one of them appeared to be already out of print: Gwendoline (aka The Perils of Gwendoline in the Land of Yik-Yak) starring Whitesnake's 80s video vixen Tawny Kitaen, and Exposed, starring Christina “They Call Her One-Eye” Lindberg. The last of the three films, while having had a couple of DVD releases already, was at least a very recent Blu-ray release from Scream Factory: Women's Prison Massacre, starring Lauar Gemsar as Emanuelle, in one of the notoriously violent Emanuelle entries from Italy. Women's Prison Massacre is the last in a trilogy of Emanuelle/Women-In-Prison films that were shot back-to-back my Bruno Mattei in the early eighties, the collection of these three films is somewhat confusing as both their productions and releases – and content – overlapped heavily, coupled with the rotating title changes depending on what and when and where each International distributor was doing with and handling each of the films. Even after their respective DVD releases in the early 2000s, I had to double- and triple-check the specs, credits, and descriptions of each film on the internet to finally get straight that the other Mattei/Gemsar Women In Prison collaborations were not in fact the same film re-titled by different distributors. Of the three, I'd up to this point only seen Violence in a Women's Prison, which had been released by Shriek Show on DVD over a decade ago. I did not, at the time, think that film was very great. Watching the new Blu-ray of Women's Prison Massacre, I found that to be the far superior film of the pair, it's a nearly arthouse take on the Women-In-Prison sexploitation model, stretched to new heights by the brazen homages to Assault on Precinct 13 and The Deer Hunter, which keeps things moving at a far more exciting pace that the film has any right to. Additionally, while I nearly always love the exotic Laura Gemsar in or out of her string on Emanuelle roles, in Women's Prison Massacre she really turns in a solid and confidently impressive performance. Mattei and Gemsar really outdid themselves on this one, and as far as exploitation flicks go in general, this is one of the best and particularly bloody for a WIP flick, and has even managed to spark in me a genuine interest in revisiting Mattei's previous works in the Women-In-Prison and Nunsploitation sub-genres.

I followed this film up with Just Jaeckin's Gwendoline, which is the “director's cut” version of the longer-titled Perils of Gwendoline in the Land of Yik-Yak, and I was duly stunned into a surprised, smiling silence to see that the director of the original Emmanuelle film (from 1974) had taken his erotica tendencies into a whole new realm of tongue-in-cheek comedy, complete with amazing sets, locations, and lush, sexualized costuming – some of this film actually reminded me of Mad Max Fury Road, at times mixed with Big Trouble in Little China. With this film, Jaeckin took sexploitation smart-women-in-peril filmmaking in the Philippines (a Roger Corman staple) to a whole new level of sexy, funny, charming, and sophisticated camp. As much as it pains me to say this, I actually preferred Gwendoline (based on the fetish/bondage comic book “The Adventures of Sweet Gwendoline”) over the sexy camp classic Barbarella. It's surprisingly hard to picture the sweet, charming, young Tawney Kitaen here in the lead role of the innocent and sexually curious Gwendoline in 1984 as the assertively sexy vixen of Whitesnake's videos only a few years later into the late-eighties.

The last of this impromptu Xmas sexploitation trilogy was Exposed, aka Diary of a Rape, starring Christina Lindberg and which preceded Thriller: A Cruel Picture / They Call Her One-Eye by two years in 1971 but which for newer audiences such as myself follows our introduction to the beautiful sexploitation Swedish actress Lindberg. Exposed actually re-works extremely well as an unintended follow-up to Thriller, in that film we see Lindberg getting to kick some ass in what is one of the most poetic revenge stories I've ever seen – Exposed works like a sort of antithesis to Thriller, where Lindberg's character experiences quite a different, subtler form of sexual manipulation and blackmail, and then spends the actual plot of the film both trying to escape her situation and simultaneously overtly asking for help with her situation – but asking her current jealous and thick-headed boyfriend proves to be only a brick wall for her. In Thriller, as Lindberg goes on her rampage of revenge, we're with her all the way. In Exposed, she creates a character that we completely sympathize and empathize with, and again, we're with her all the way. In both films she is completely engaging, and part of this is undoubtedly due to her nonthreatening beauty and sexuality. She is attractive, but the scenes she is disrobed in are not in the film to entice, but to illustrate, with Lindberg in firm control of her character, the manipulation that has made her a victim of slimy opportunists. And the film shows us, in a way: is not her thick-headed boyfriend being an opportunist as well? He uses the fact that she had been a sexual victim against her, and almost as a reason not to help her. In both Exposed and Thriller: A Cruel Picture Lindberg's empathetic characters are then basically left to fend for themselves, which is both sad and empowering at the same time. And speaking more of it as an overall film (or film experience), Exposed is also beautiful in its photography and its editing (once again sharing an aesthetic with Thriller).

Overall, this Xmas Xploitation Triple-Feature was far more than I could've asked for; beyond expectation (or Xpectation?) because going into this, I had no expectation. What I did have was a pile of DVDs shipped by Amazon sellers and delivered by Canada Post in time to relax and spend some leisure time with before we get into the thick of the Xmas holidays. Merry Christmas, everyone! 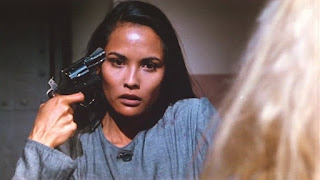