Man, have I ever neglected this blog – and there have actually been things to revere from Franco’s persistently released repertoire. Great things from Blue Underground, yet I’m waiting, waiting for that damned Bloody Moon release from Severin Films… The Franco slasher I’ve yet to see. Being both a Franco fan and a slasher fan, I’m trying hard to keep my expectations in check and let that first viewing experience speak for itself. Anyhow, I digress as usual, and what the hell am I bitching about, anyway, I still haven’t written about that killer Eugenie de Sade DVD Blue Underground released last spring! Now, that was some kind of treat – one of the best Euro-erotic thrillers I’ve seen, and while Faceless will probably remain Franco’s most skilled cinematic outing (Eugenie does have its raw, rough edges – and what was with the editing in the death scene?), I would certainly go so far as to say Eugenie de Sade is his best film. Yes, there, I said it. I’m comfortable with that. Eugenie de Sade is the sexiest, most classically erotic and one of the most compelling stories Franco’s put to celluloid. While some of the sexual shenanigans come off as a bit kinky (not a bad thing), the goings-ons never really reach a feeling of full-on exploitation, despite its likely otherwise intentions. It’s constructed like a thriller, if I may be so bold to say, in an atypical way as Eyes Wide Shut is also a thriller, though the ideas are more of exploring the sexual beings of the film(s). Setting the film across a winter backdrop, whether by design or by serendipitous accident (no pun intended), was probably the main advantage for the gorgeous photography. But at the end, that little bit of climactic bloodshed was honestly a few seconds of utter crap that could have easily been fixed with some minor editing. Which brought me to think about films like Female Vampire, where vampiress Lina Romay walks towards the camera in the opening shot, closer, closer, closer, until we see her physically bump into it. Why not cut that shot a few frames earlier? I have a creeping suspicion that the flaws in many of Franco’s works are editorial (not to take anything for the directorial effort, mind you), but they are things that could have been fixed, and were not. Was this a decision by director Franco? The producers? The editor? Who exactly had final cut here? Judging by the plethora of “official” versions of Vampyros Lesbos, probably nobody. It’s not to be unexpected that Franco would have speedily left his films in the dust on the word wrap, as he dashed from project to project, creating what is probably a world-record Filmography.

Check out below – a representation of the original out-of-print DVD cover released by Blue Underground (white), and the current official and inexplicably switched cover (black). Note that the black cover actually utilizes a still from the film The Devil Came from Akasava, not Eugenie de Sade. --V. 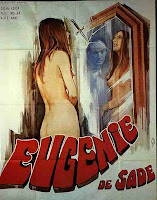