Brides of the Impalers 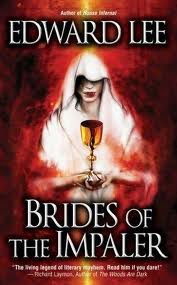 When I got back from Europe earlier this year the first thing I did was pick out Edward Lee's novel Brides of the Impaler, which y wife had given to me as a birthday present some time ago. I've always been a fan of the frenzied writing of Lee's and his uber-sexualized Lovecraftian fantasy-horror. But this time, I was in for something slightly different. Opening to the Acknowledgments page, I was a little surprised to see these names mentioned as the main inspirational source for this novel: Jess Franco, Amando de Ossorio, Paul Naschy, and Jean Rollin, “...whose macabre and brilliant films have enthralled me for years and whose manipulation of imagery and atmosphere have proven a polarizing influence.” Not only were these filmmakers thanked, they were the first ones to be thanked in the long list of appreciative credit. The book itself in a contemporary, unique and highly energized twist on the Dracula legends that sees The Nun appear in modern-day New York City, recruiting ex-drug addicts/street girls into a supernatural order. Filled with sacrificial implements, and general blood-splattering (and again, heavily sexualized) mayhem this plot half plays out as a police thriller (probably another nod to the Italian Poliziotteschi flicks of the seventies) on top of the religious splatter-horror. It's an awesome ride from author Lee, as usual, who penned one of my all-time favorite novels (if you can find an old copy grab it!) titled “The Coven”, from the early nineties, I believe. 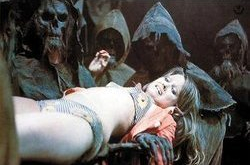 While Lee may have been inspired by this handful of creative genre-warping film directors, his novel nevertheless is pure Lee, not really reminiscent of Franco or his cinematic cohorts. No, for that I had to go back and revisit the likes of Return of the Blind Dead (Ossorio) and Vampiros Lesbos. Not that summer's back with us in full force I find my thoughts swimming back to Soledad Miranda, Ewa Stromberg, Vampiros Lesbos, and She Killed in Ecstasy. Although this cinematic style is not exactly present in Lee's book, I can easily see how one is inspired by all of this. There is something beautiful about the cheap film stock and bright location shots of these stories, not to mention the talent and charm in front of and behind the cameras, which inevitably tends to bleed through.

And on yet another sad note, I'm writing this on the day (one of my only mornings off all week) that Sage Stallone was discovered to have passed away suddenly, a man who unfortunately might me more known to people as the son of Sylvester Stallone, but who actually co-founded the film company Grindhouse Releasing and was responsible for bringing cinephiles films like Fulci's The Beyond, Deodato's Cannibal Holocaust and Lenzi's Cannibal Ferox to the North American DVD market. At 36, he's too soon gone on to join most of the above-mentioned filmmakers and talented actors, RIP. --V 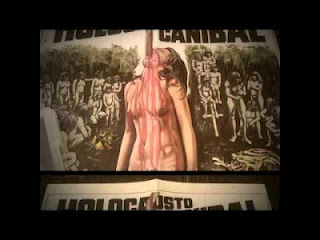