I had my second look at Jess Franco's "99 Woman" last night, out of sheer curiosity I'd purchased Blue Underground's French x-rated version of the film. In a way, I'm glad I did -- all of Franco's wonderful actresses including Maria Rohm , Maria Schell, and Rosabla Neri have 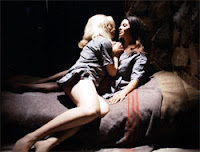 been dubbed into French, which amps up the alluring quality of these European starlets. The downside is that the film is continually interrupted at inexplicable intervals with hard-core pornography. The first time I watched this it came off as more of an amusing curio, but the second time around it was actually slightly annoying. The pornographic inserts are not sexy or erotic, they're instead abysmally perfunctory. These inserts have absolutely nothing to do with the characters in the film, nor are the actual actress used - nor is it even edited in a way to make it appear as though the actresses/characters have been used. I'd heard that Jess Franco was unaware that these pornographic clips had been inserted into 99 Women. Er, pardon the pun. However, the use of the zoom lens (especially in the first lesbian hardcore insert) just screams Franco's style. Well, maybe he shot it, but it wasn't intended for 99 Women. At any rate, by the end of the evening, I'd sort of wished I had purchased the director's cut of this flick.

As for the film itself (minus the inserts) it's actually a really well-constructed, nicely shot piece of exploitation mayhem. The entire women-in-prison theme (99 of these women, as is stated in one of the opening scenes) is exploited here with confidence and gusto, which makes the film totally work on a sheer-entertainment level. So much so, I was reminded of some of the best of the sub-genre, namely, the Corman-produced Pam Grier/Sid Haig WIP flicks of the early seventies. Of course, that being said, this Jess Franco/Harry Alan Towers production had actually come out in 1969, beating Corman out by a couple of years. While Roger Corman may have perfected this sub-genre, it was Towers and Franco that really got it going (you can also see it in Franco's almost-as-entertaining Barbed Wire Dolls). Had Franco continued directing films in this exploitation sub-genre, I seriously think these films could have become minor classics. As it were, Franco wound up becoming more known for his infamous Ilsa series, the Nazi Women-in-Prison sub-sub-genre of exploitation filmmaking.

For what it is, 99 Women has all the right WIP ingredients in all the right places -- the synopsis on the back of the DVD box is simply: ...an island prison where abused yet luscious young lovelies surrender to their own depraved desires.Pretty much says it all.-V.

Franco HD may be far into the future yet.

I've been catching up on some of my stockpiled Blue Underground Blu-ray releases. Manic, Bird with the Crystal Plumage, Toolbox Murders, etc. I had been holding out hope over the last year that if any company would start putting out Franco in an HD format it would've been these guys. However, it seems they're more interested (and I can't honestly say wrongfully so) in releasing Dario Argento's catalogue over the next six months. Commercially, and especially for a low-budget/high-end HD distributor, this move makes way more sense. It's just a shame, as they have the lush Venus in Furs, Eugenie de Sade and Eugenie... the story of her journey into perversion.

However, I have serious doubts that the mere popularity of Argento's films is the sole reason holding up these releases. After all, there are other distribution companies that are releasing Blu-rays now who hold the rights to some of Franco's massive catalogue. (Image and Anchor Bay UK, possibly?) Another reason could be the rights licencing has expired... but really, what I fear is that it was the digitally technical aspect that allowed the Franco films to be restored onto DVD in the first place that's going to bite HD fans in the ass.

After watching some of the behind-the-scenes on the Anchor Bay UK box-set release of his films, I was witness to an extremely informative documentary on the restoration process of some of these Jess Franco titles. It broke down like this:

They transferred the film to digital media (in other words, they digitized the films). Creating mpeg2 standard-definition files from this digitization, the restoration thus began -- on the mpeg 2 files themselves. Hence, the digital restoration on Franco's films were attributed solely to the standard-definition DVD files they were going to be using to author the DVDs themselves. In order to go back to do a restoration for Blu-ray, they would have to do this entire process over again, starting with the original film prints.

Does it seem likely that these companies would take the time, under current economic circumstances, to do such a thing? Once again, I have my doubts. Still, I'm hoping Blue Underground or Image, who would appear to have some success with commercial Blu-ray releasing, will at some point get to these titles sitting at the back of their catalogues and throw dogs like me a bone.

So here's to patiently waiting...