Romina Power, daughter of Tyrone Power, plays the titular character in Jess Franco's adaptation of the Marquis De Sade's story. If “Die Nonnen von Clichy” is Frano's nunsploitation masterpiece, "Justine" is undoubtedly his De Sade masterpiece. Filled with insane zoom-shots and a kinetically impulsive racking of camera focus, at least this time Franco's creation was expertly edited so that all of this cinematographic insanity comes across with the semblance of artistic intent. Which marries well with the actually artistically shot erotic elements of the movie - and believe me, there is quite of a bit of that. Too bad the movie seems padded with lingering exterior shots which only serve to extend the running time to a surprising two hours and four minutes. Well, I guess that's why god made fast-forward buttons (but I suggest you only use that power after you've seen the film at least once, if you don't know what to expect it is rather nicely shot). Rumor has it that Romina Power was only sixteen when she shot this film, mostly nude (and involved with simulated torture), the back of the Blue Underground DVD box clearly states she was indeed 18, yet the date of release states 1968... with Romina having been born in '51. Sounds like sixteen to me, considering they would've shot the film prior to the actual release. Curiously, if you research "Justine" on the internet, there you will unearth not one, but two different release dates for the film, depending on which site you come across. Some say 1968, some say '69 (which would somewhat more conveniently make Romina 17 or 18 when she did the picture). 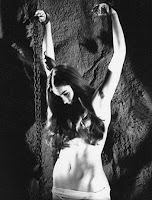 Alas, should this controversy get away from me, it should not be forgotten that this is a solid film based on De Sade's work, from any filmmaker. Philip Kaufman went and created a story based on the man himself in a version called "Quills" with Kate Winslett, the same year a Canadian film was released directly to video, simply called "Sade". This latter videotape was released while I was still working at a local Blockbuster video. It made it to the new release shelf for 2 days before all the Blockbuster stores received a memo... to pull it from the shelves. End of story. These tapes sat in the back room of Blockbuster for months, before they were finally ordered destroyed.

Ironic, as Marquis De Sade faced the same fascist censorship with his writings, no...?