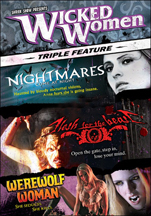 I was reading this month’s issue of Rue Morgue, and somewhere hidden inside I saw an advertisement for the new triple-DVD sets coming out from Shriek Show (Media Blasters) right around Christmastime. Now, if you’re a fan of cult/horror movies and you don’t know about Shriek Show’s recent foray into multi-packaging, then I suggest you do some cramming on the subject – they’re retailing these triple-packs for about one quarter of what the original (and individual) DVDs cost as separate purchases. I know this, because I saw that the MSRP for the “Wicked Women” set was about 19 bones, and I hauled out close to 68 bucks total for each of these suckers when they were released only around eighteen months ago. Anyway, this Wicked Women Triple-Pack features the Italian exploitation flick Werewolf Woman, a surprisingly sexy little flick disguised as a horror movie – but it’s a really well-shot slice of Euro-sleaze. The next one is the Shriek Show-produced Flesh for the Beast, which is also fairly erotic (but this time it really is also a horror movie), though it’s nothing more than a very entertaining spin on an old premise – a group of paranormal researchers spend a night in a haunted mansion. The last one in the set is Jess Franco’s Nightmares Come at Night, which includes the participation of the gorgeous Soledad Miranda – and despite the top-billing, it’s really more of a glorified cameo. Out of the three films, I actually remembered Franco’s film the least. I remembered that Miranda was not in it that much – I remembered the print looked pretty bad – and I remembered it was some kind of heist-thriller, though I couldn’t recall the particular details of the entire affair.

Throwing this over-expensive disc into the player for a little memory jog, this is what I’ve concluded – That Soledad Miranda is indeed as gorgeous as I’d thought, though she’s in the film far less than I’d remembered. The print itself is better than I’d thought. Actually, the Shriek Show film transfer is pretty good – it’s the camera lens that appears to be the actual culprit here. Not surprising for a Franco film shot back in the late 60’s, the cinematography is filled with soft lights and softer focus. In the dark scenes, the lens actually looks dirty and reflective and there’s a relentless L-shaped scratched on the left side of the frame – probably from having to continually wipe all the Vaseline off the lens. Anyway, I got a re-grip on the plot, which is basically a stripper named Anna (Diana Lorys) and her female lover/roommate (played by Colette Giacobine, something of an economy-style Brigitte Bardot) and Anna’s doctor, caring for her as they suspect Anna has something of a mental condition that needs to be treated – she awakes in the middle of the night from sexually hallucinogenic night terrors, imagining that she’s murdered one of her lovers. She then confronts the doctor about this, and the first hour of the

film segues into a flash-back telling of the story up to the point of the murder, which is really just an excuse for several sexual encounters while Lorys performs the majority of the scenes (both sexual and expository) in the buff. The subsequent half hour (where we finally see a couple of nice scenes with actress Miranda) turns the whole thing into a straight-forward thriller with a murder/robbery plot, an impressive corkscrew twist and a somewhat shocking finale. All in all, not too shabby. I even liked the freeze-frame opening credits, which really sets the mood as an erotic thriller – and one of the most elemental Franco films I’ve had the pleasure of watching.

Upon further reflection, I recall that Shriek Show had announced the release of Franco’s “Sex Charade” back in the summer of ’04, and then it was suddenly dismissed from their slate only days before the release date. Merely a couple of months later, they released Nightmares Come at Night. I have suspicions that these two films are one in the same – though I can’t find any information online to support or denounce this theory. The only clue I had to go on was that I’d (years ago now) read an in-depth essay on the works of Franco and Soledad Miranda, where it was revealed the pair had produced a total of six completed feature films together: “She Killed in Ecstasy”, “Vampyros Lesbos”, “Eugenie de Sade”, “Count Dracula”, “Devil Came from Akasava” and “Sex Charade”. No mention whatsoever of Nightmares Come at Night, and in fact, I’d never even heard of this movie until Shriek Show released it... Two months after the aborted Sex Charade release... Both of which were originally produced in French in 1969 and started Soledad Miranda, both crediting her with the stage name Susan Korda. Hmm…
-V.
Posted by V at 1:33 AM 1 comment: