The Diabolical Dr. Z and the sensuous Killer in Ecstasy 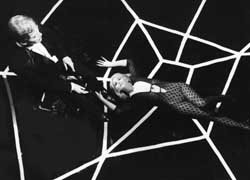 Jess Franco’s comic book stylized The Diabolical Dr. Z is a very weird, oblique essay in revenge, where mad scientist Dr. Z succumbs to a fatal heart attack after being lambasted by his peers for his unorthodox experiments in mind control through spinal surgery. With the fire of vengeance in her belly, his daughter, played by actress Mabel Karr (who could be a precursor to the Ilsa character later directed by Franco in The Wicked Warden chapter of the cult WIP* series) goes about exacting her revenge on her father’s scientific peers, and she makes no bones about going about it the long way, which entails her killing a female hitchhiker and burning the corpse in her car in order to fake her own death, becoming disfigured by the fire she’d set and then having to perform cosmetic surgery on herself (!) before kidnapping and performing the mind-controlling surgery on an innocent go-go dancer named “Miss Death” so that she may use the dancer to seduce men into her murderous trap – wherein Miss Death proceeds to slash the victims across the neck with her two-inch-long fingernails while intermittently slinking through the film in various see-through costumes – and despite the fact that Dr. Z’s daughter already has a housemaid and a serial killer under her cerebral control. Huh. This needlessly complex revenge scenario become a little ridiculous even for Franco, but the great thing is that the whole thing almost comes off looking like Russ Meyer got a hold of a Hitchcock script that had been

re-worked by Wile E. Coyote somewhere along the way.
*Women in Prison
I should also mention that Miss Death’s spider-dance performance sequence (opposite a mannequin) seemed the obvious basis for a re-working into Soledad Miranda’s famous Vampyros Lesbos mannequin striptease dance five years later (1971). Within that same time period, actress Miranda would also star in Franco’s own remake of Dr. Z - 1970’s She Killed in Ecstasy…

Conversely, in this much-pared-down remake, the adored Soledad Miranda stars not as the mad scientist’s daughter, but rather as his wife; who this time goes on her own vengeful rampage, essentially letting what sparse bloodletting there is splatter on her own hands (and don’t get too excited, I’m just being figurative - there’s not really any red to speak of in these films). She Killed in Ecstasy has two major points going for it; first of all, there’s a lot of nudity and eroticism from our leading lady, and secondly, the story is really a hell of a lot tighter and to-the-point with Miranda doing her own dirty deeds here. Gone are the endearing comic-book sensibilities of Dr. Z, and in is the overloading of full-color Euro kitsch, which this film boasts almost to the point of absurdity! This, in all honesty, is just another reason this 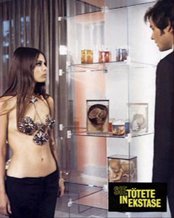 particular Franco film is so endearing.
Unusually, there wasn’t any of that on-screen nudity in The Diabolical Dr. Z, even for the time it was produced (1966) Franco usually displayed a little female flesh in his cinematic forays. But Dr. Z from a technical standpoint looks far superior. Part of the accumulated kitsch that makes up She Killed in Ecstasy comes from Franco’s signature overuse of the zoom lens and utilization of long, sketchy camera movements in place of actual coverage and competent editing, which was pretty much his standard filmmaking technique in the early 70’s. Not to say She Killed in Ecstasy is a bad-bad movie (well, it is if you don’t like bad movies), in fact I find it a lot more charming than the earlier black & white Dr. Z version - though

speaking of Dr. Z, the final showdown between Miss Death’s boyfriend and the daughter’s personal serial killer is pretty cool, and the conclusion is weirdly James Bond-esque. But what makes She Killed in Ecstasy special is the leading femme fatale in this one, though she’s considerably more sexy than menacing.

While Image Entertainment has more recently re-issued She Killed in Ecstasy with a reportedly much finer print transfer (2004), and as much as I do love this film, I felt that my scratchy, efficiently bare-bones Synapse Films version (2000) was just fine for this movie. On the other hand, the Mondo Macabro release of The Diabolical Dr. Z showcased some amazing extras, including a kick-ass 15-minute Franco documentary and comprehensive and insightful biographies on the talent.