Okay, although I'm finally reviewing this glorious Spanish slasher, it's been nearly a year since I've actually watched it. Seriously, it's been that long, not only since I've watched a Jess Franco film, but also since I've really had any time to blog. I'm thankful to Severin Films for making this available on R1 DVD, though it's not Franco's best film, it's pretty bloody and entertaining. It's mostly what one would expect from a Franco slasher, and also some one wouldn't expect. There is a a fairly standard 80's slasher-style prologue that kicks the films off, and it becomes something of a coda father down the plotline. As acceptably requisite as this storytelling technique is, the sheer competency of it is actually a bit of a drawback in this Franco film -- Franco's at his best when it comes to sex and exploitation, and rest assured, there are those scenes in Bloody Moon, along with some awkwardly-executed yet much appreciated violence (another Franco trademark), and though it might be redundant to delve further into the plot of a slasher film (a string of nice-looking girls get murdered one by one until the reason for the serial killings are revealed at the end -- see? -- redundant.) all in all it's a successfully entertaining flick from the man who just received the lifetime achievement award from the Spanish film industry's Goya Awards (Spain's version of the Oscars), and with Penelope Cruz cheering him on, no less!

I've been visiting the UK for the last couple of weeks, specifically on the search for more Franco and Rollin flicks that might not be available in the region 1 area. I couldn't believe it when I came across Anchor Bay UK's eight-disc Franco box set in HMV for £15 - I nearly died. Of the eight discs, I actually didn't own any previously, the set included Blue Rita, Ilsa the Wicked Warden, Barbed Wire Dolls, Love Camp, Sexy Sisters, Jack the Ripper (with Kinski) -- utterly rad. Speaking of Kinski, both of the Anchor Bay (UK) Herzog and Herzog/Kinski box sets were also around £15. With the currently high Canadian dollar, that's about $23.00 -- and the tax is included in those prices, so there's no additional charge. I also saw tons of Italian, Spanish, Japanese, R1 Criterion and

exploitation DVDs (region 2, mind you) for £5 to £10, £10 to £20 for the box sets. I started to wonder yesterday if we were completely getting screwed over through retail pricing in Canada. I've paid well over $25 for several of those titles from Blue Underground and Shriek Show. Ah, well, what's done is done, and I have eight new Franco flicks to play with now. On top of that, I've been on the hunt for Blu-rays unavailable in our home region, as well -- and I did find a few, including the previously-reviewed "Welcome to the Jungle". Purchasing this little gem, it got me thinking about the counter-Hollywood style of the film's writing and execution (by Die Hard 3 scripter & Punisher writer/directer Jonathan Hensleigh). A hell of a lot of chatter and getting-to-know-you intermittent with some building suspense up to a gory, bloody third act. Much in the style of the Italian cannibal-horror sub genre, with films like Cannibal Holocaust and Man from Deep River (to name only a slight few). In addition, this got me thinking that Tarantino's own Death Proof more closely followed this writing format, and I actually consider it now closer to the Italian Cannibal genre as opposed to 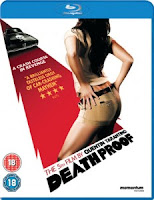 the Tarantino-described slasher genre (Tarantino even credits Dario Argento at the end of Grindhouse -- maybe it should have been Umberto Lenzi). Yes, I'm comfortable with viewing Kurt Russel's death proof machine as an allegory for a tribe of Cannibalistic mountain natives, the sets of girls only lost wanderers in the jungle. Regardless, when I get back to Canada, it's going to be all Wicked Wardens and London rippers for this kid. Eight discs is a thick stack to conquer. But first, I must visit Bloodbuster in Milan as the travels and the search for more Euro treasures continue.