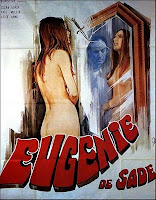 With a title likely derived from Radley Metzger's Camille 2000, this vivid Franco opus is otherwise known as Eugenie De Sade. This film, along with Franco's She Killed in Ecstasy, are my tip-top two absolute favorites of the small cannon starring his first significant muse, the stunning Soledad Miranda.
De Sade 2000 / Eugenie Sex Happening / Eugenie De Sade opens up with a short lesbian scene involving Miranda, filmed in a brief series of gorgeous hand-held and somewhat candid-looking shots intended to emulate a kind of snuff film, which Franco, appearing here as an actor, is viewing in a private theater.
This is the opening to yet another Franco riff on the writings of the Marquis De Sade (which is evident even in the title). This time, the story is more straight-forward and nowhere near as meta-fictional as the earlier Eugenie... The Story of her Journey into Perversion (shot one year previously, in 1969). And this time, Franco wrote the screenplay himself. Somewhat unfortunately, however, in place of the former film's meta-fictional aspect we now get some stilted and slightly boring off-camera narration to help the cohesiveness of the story along, which is being told to Franco's character by Miranda's character in a flashback set-up while she lies dying in a hospital bed. It reminded me of the horrible Blade Runner voice-overs Harrison Ford had done in an effort to intentionally sabotage the whole narration idea. Yeesh. At any rate, the stilted narration is actually not much of a distraction as it's running over some beautiful exterior shots and the gorgeous Miranada, who is captivating both in and out of her clothes. She was a true gem in Franco's films, and his photographers (Manuel Merino this time) certainly knew how to shoot her – though I have a suspicion that filming Miranda was sort of like shooting exterior locations in Europe – it's kind of hard to take a bad shot. Now if only she had a better English voice-over actress.

While the Miranda/Franco collaborations Vampyros Lesbos and The Devil Came from Akasava might be the more famous cult items, part of both of those films' infamy and popularity, I'm sure, are partly due to the rushed/cheap filmmaking and nearly inept editing that make them so-bad-they're-awesome pieces of kitsch. And without a doubt, the soundtracks to those films are the best in Franco's career. A jazz fanatic, Franco unfortunately used that inspiration only at sporadic moments in Eugenie De Sade (most overtly near the finale when the film intercuts to and from a jazz bar), this film is scored by Bruno Nicolai, who also scored Eugenie... The Story of Her Journey into Perversion & 99 Women in the sixties. I may have misworded something there, because Nicolai's score for De Sade is also awesome, especially during the third striptease/lesbian murder... it's just that... well, hell, it's no Vampires' Sound Incorporation.
Like “Lesbos”, this Franco outing revels in a type of excess only Franco could really achieve. Lurid, but not altogether sleazy, and there is plenty of nudity and what's been dubbed “soft-gore” by Christopher Null of filmcritic.com. Not as kitschy as “Lesbos”, “Akasava” or “She Killed in Ecstasy”, it's not nearly as inept, either, and in fact I'd say De Sade is one of Franco's most accomplished works of his entire career. Although that's not to say De Sade is not without a little kitsch of its own – check out the awesome nude photography/murder set piece thirty minutes in.
Franco plays a writer in this flick who tends to act more like a stalker, though that's not really unusual when it comes to his on-screen presence. Also creepy is Paul Muller, who plays Miranda's father and accomplice to the murders. At the end she lures one of the jazz musicians from the club, presumable for the final perfect murder, but she actually ends up becoming attached to the trumpet player – of course, all of this comes to a head in the midst of obsession and jealousy, and hence, Miranda's character winding up in a hospital bed. Obsession does play a significant role here, much as Franco himself was obsessed with the writings of Marquis De Sade since he'd started his cinematic career.
Eugenie De Sade was only one of six films Franco shot with Soledad Miranda in 1970 – a year in which he also directed three other non-Miranda projects. And while he would go on to find decades worth of inspiration through his next muse, Lina Romay, the Miranda projects seem like they will always be the focal point of his insanely prolific career, and I'd have to say, deservedly so.
-V.
Posted by V at 11:05 AM No comments:

Eugenie... The Story of her Journey into Perversion

Holy crap, how's that for a title? I'd say it's in competition alongside some of Sergio Martino's gialli from the seventies!

I started thinking about Franco again while planning the move to the London, something I'd read about the man years ago that had stuck with me – how he would often choose directing jobs based on the food in the region the project would be filming.* Yes, he allowed the food to be the deciding factor. And I say, completely without facetiousness, I believe he had his priorities straight off the bat. Although I'm not sure how far he traveled to shoot Eugenie, from what I've gathered from the trusty internet (okay, that was facetious) he shot this sucker around Barcelona. Of course, Franco being from Spain, I have a hunch he may have been familiar with the territory.
This tribute to Marquis De Sade's “Philosophy of the Bedroom” is a meta-fictional take on his work, where the characters refer not only to De Sade himself, but to his actual works of fiction within this work of fiction. Which is why I would lean more on calling it a tribute to his works, though from what I've read this story is closely based on the slightly absurd tongue-in-cheek style of his writings, much like Philip Kaufman's “Quills”.
This one stars one of my favorite cult/Fraco actresses, Maria Rohm, and she looks the best in this film. Never more stunning, though her on-screen vampiness was probably put to better use in “Venus in Furs”, the photography of her form and actions in Eugenie is some of the best. If not the best. But speaking of vampiness, I think to one of the set-up scenes in Euginie where she smacks her bitch-servant across the face, to which her co-star Jack Taylor asks, “Was that wise?” Rohm retorts: “You don't love me for my wisdom.”
Okay, maybe that called for a spoiler alert because that was pretty much the best line in the whole flick. The rest of Eugenie, as a film, pretty much relies completely on the lushly photographed women in various stages of nudity and sexual situations. And the term 'sexual situations', though a well-worn and thrown-around term of the MPAA's, was never more apt than in the context of a Marquis De Sade adaption.
Narrating some of these situations, during he more lurid goings-on (though the psycho/sado-sexuality is a bit lite by today's standards) is Christopher Lee, whose scenes weave the whole meta-fictional aspect through Eugenie's cinematic reality... and while he spouts De Sade soliloquy, there are naked women being stabbed on the same stage. (Yet in an on-screen interview present on the Blue Underground DVD, Lee claims to have had no knowledge of the content of this flick until he screened the finished product. I dunno... what exactly did he think he was watching from behind the curtain? And what about that girl who was getting on her knees in front of his--)
Anyway, as far as Franco's cannon goes, Eugenie has been one of my favorites for a long time now. As much as Franco seems to loath his own work, even he claims (again, on-screen) this Eugenie is the film of his that he hates the least. Trust me, it's at least better than that. But it doesn't surprise me that an artist would find his own work hard to take joy from, I've heard others say similar things about their own work. Sometime you have to look past the WIP flicks, as entertaining as they are, to see that Franco really was an artist at times. Eugenie was no accidental film, Franco has made many other films that boast lush photography and an intelligent sense of humour. And sometimes a dumb sense of humour, too. Personally, I think the fact we're still talking about these films decades later speaks for itself.

On a side note, when I was looking up some info for this post, I inadvertently discovered that producer/writer Harry Alan Towers (who took credit under the pseudonym Peter Welbeck, the same name he used for 1975's And Then There Were None, which also co-starred his wife Maria Rohm) had passed away in the summer of 2009 in Canada – the same year Jess Franco won the Goya award (Spain) for Lifetime Achievement.
Harry Alan Towers also produced a few works for director Tobe Hooper later in their careers. One, which I hope to revisit soon, was Tobe Hooper's Night Terrors (again loosely based on De Sade) starring a young actress named Zoe Trilling, whose star, to my honest surprise, never really shot out.