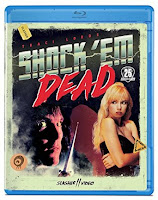 It was the summer of 1994 that I walked into the little corner store – an independent retailer – at Richards & Pender Street in Vancouver. It was primarily music, a used and collectible record store; the proprietor also had a lot of CDs – but in the far back corner of the store, as far away from the summer sun streaming in through the large glass windows as physically possible, was a small wooden thrift-store bookshelf that held, in no discernible order whatsoever, used VHS tapes of all genres. Interestingly, there were no mainstream Hollywood movies there on that shelf. There were a couple of 80s horror films that starred a very young Bill Paxton, and a weird-looking horror-thriller that starred Sting and was directed by celebrated filmmaker Robert Altman with I title I have never again come across since that day (and can no longer remember what it was). Attempts to find this film on the internet have been fruitless, as well, and possibly the VHS cover was using an alternate title; this happened quite a bit in those days. I still remember Uumberto Lenzi's Nightmare City and its Canadian-release VHS cover from the early 80s – a naked woman hanging upside-down with her nipple torn off, and the alternative title “City of the Walking Dead” partially obscuring said ripped-off nipple. Also long forgotten was the name of this little corner used-record shop, the shop itself has been gone for decades now, replacing by an ever-increasingly dilapidated convenience store that is somehow, inexplicably, still in operation to this day. I do remember, however, having a lively conversation with the proprietor when I brought the used VHS tape of Stuart Gordon's Re-Animator up to his counter to purchase. He was a tall, young-ish man with a sore-looking condition of skin psoriasis all over his otherwise pale face. I was about to pay $9.95 plus tax for this used Re-Animator tape that had be re-packed in a black Amaray clamshell by some unknown video store long before it ever wound up at this guy's shop, and he proceeded to explain to me why the VHS videotape in my hands would never become valuable to any collector. 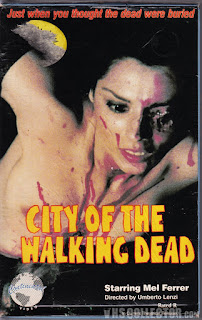 “Look at this,” he said, removing the videotape from inside the clamshell case and pressing the tiny black release button that allowed the back of the tape to swing up, exposing the magnetic tape and all of the thin silver and white reels the tape had to wind around in order to get from the right side to the left while playing through a VCR. “All these moving parts. Records don't have moving parts, and that's why they can become collectible. Something like this, all these parts and components – it will never become collectible. These tapes won't ever be worth anything to any collector”. I paid for my Re-Animator tape and left.
I still have that tape to this day, almost 22 years later.

Funnily, I was not the only one to hold onto a couple of my old VHS horror tapes. In fact, I literally only held onto a couple of them when the DVD revolution hit. Now, though, it's astoundingly clear that VHS tapes have indeed become highly coveted collectors items, some going for hundreds of dollars on eBay and Amazon, in a time where we've gone even further beyond the original DVD revolution of the new millennium into HD and 4K Blu-ray disc media, creating something of a treasure trove for collectors of all types of media from magnetic standard definition to digital hi-def picture quality; and often, fans of niche and genre film fare are the ones benefiting; many genre (horror) titles have survived the advances in film media technology, and it's not unusual to see titles that have made it across all the home video formats: Betamax, VHS, Laserdisc, DVD, and Blu-ray (and I'll include digital streaming in this sentiment, as well). Of course the biggest impacts were made by the VHS, DVD and Blu-ray formats specifically, clearly defining the technological generations in home video history. And with these defined generations, we see that there are also titles that had skipped a generation, and it's amusing to me when I happen to come across a horror or cult film title that had run out its print in the VHS days only to make a surprise comeback on a hi-def 1080p Blu-ray disc, while missing out on the entire DVD generation altogether.
Most recently, Slasher//Video (through an output/imprint deal with the Blu-ray distribution company Olive Films) has begun to release niche and sought-after horror and slasher videos on Blu-ray while incorporating the nostalgic aspects of the VHS days. These Slasher//Video releases were not entirely imagined by design – often, Slasher//Video (Olive Films) could only track down a Betacam SP tape master to provide us with the digital transfer to their Blu-ray discs – Betacam SP is a large videotape master, in standard definition (or Standard Play, SP), that was the standard delivery master to broadcast television and often to direct-to-video distribution in the eighties and nineties. In the case of the direct-to-video films, while they were nearly all originally shot on film, they were cut together and mastered only onto standard definition Betacam SP tapes in that bygone era of film and video production. The very name of these tapes – Standard Play – signified the maximum video quality that the technology had produced at that time. So now, mixing these distant generations of video technology, Slasher//Video has given us niche horror and genre fans a bit of an unusual and offbeat treat – we can see these wonderfully strange, gory, exciting, and low-budget originally direct-to-home-video horror movies in their original video/VHS anesthetic, but on a Blu-ray disc that will never wear down, no matter how many times the film is played at home. In the VHS days, god forbid you would fast-forward to your favourite part of the tape (an explosion of blood, a couple of boobs, a kickass werewolf transformation and subsequent gory slaughter) more than a couple of times; the tape would soon develop tracking issues and interruptive glitches, constantly changing the way you could see your favourite scenes. Admittedly, this is one of the charming aspects about VHS to some collectors. But for those who are keen on reliving the nostalgia of the VHS aesthetics with their 1980s horror obscurities, Slasher//Video and Olive Films have fallen on something very unique for horror fans, by delivering that VHS aesthetic on their Blu-ray and DVD releases. I'm curious to see how Slasher//Video's new mixed-technology retro-releases will be received by fans down the road. For me, it gives me the chance to see some of these films that I missed before the VHS tape went extinct, and I'm personally loving it. 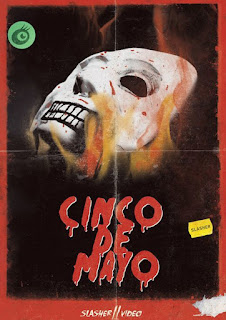 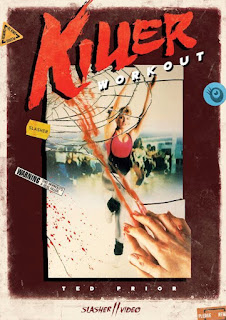 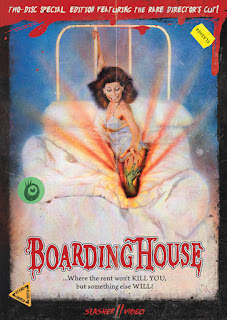 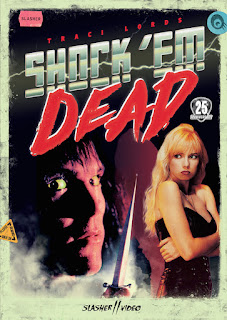